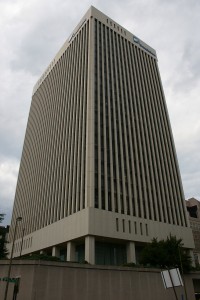 Virginia Power & Electric Company commissioned the construction of this headquarters tower in the mid 1970’s. This tower would join the Federal Reserve Tower as one of the newest high-rises in the “Main-to-James” revitalization area. The tower occupies an entire city block, which a substantial amount of the tower podium reserved for an outdoor plaza. The building closely resembles the architecture style of the Federal Reserve Tower with the narrow window casings, a recessed first floor and distinctive mechanical floors at the base and crown of the tower.

The building is composed of a high-rise tower, built on a semi-elevated podium which is visible along the 7th, 8th and Byrd Street elevations. The podium contains approximately 360 covered parking spaces. The high-rise tower contains approximately 394,000 square feet of building area. Dominion placed building-mounted signage on three of the upper floors of the tower in the mid 2000s.

Based on construction photographs, the internal tower structure is constructed with reinforced concrete and clad with metal panels and glass windows on the exterior facade.